One of the biggest issues in cases of parental alienation is the manner in which the unconscious life of the family carries the secrets which cause the problem of alienation. In that sense, parental alienation can be regarded as being part of the anatomy of the family, carried forward by each generation as if it were a dormant infection.   Some, like Childress for example, like to call this phenomenon the ‘pathogen’, I prefer to think of it as an embedded secret which is handed down through the generations and which is activated in its power to alienate if the dynamics are right.  I have written about this many times over the years and you can read what I wrote in 2013 about trans-generational haunting  and in 2016

The idea that parental alienation is not something which is distinct and different to other familial dynamics is one which is promulgated by those who believe that it could be easily eradicated.  In my experience, far from it being easily eradicated, parental alienation is something akin to a physical disease like cancer, which may never be eradicated but will be increasingly treated by improvements in medical research and trials.  I often feel that parental alienation, which is the outward manifestation of the activation of the ‘secret’ which has been passed down the family line, is a cancer of the unconscious life of the family which will increasingly be understood and treated through ongoing research and development of the work which has been done by others.

In our work at the Clinic we map the conscious and unconscious life of the family in a forensic assessment which focuses upon finding those embedded secrets, which appear as life events in the history of the family, sometimes going back as far as three or four generations.  We do this by building a three dimensional family tree in which we begin with the presenting child and work backwards as far as we can to understand from each parent, the narratives which govern their lives.  In doing so we encounter the ghosts in the nursery first of all, those stories told around the crib of the newly born generation.  It is through these tales from the past that we begin to unravel the mystery of the child’s rejecting behaviours in the present.

Here is a very simple map of the conscious and unconscious dynamics in a case of parental alienation.  Most cases are far more complex than this but this case shows how the ‘secret’ in the past can lead to alienation in the present. 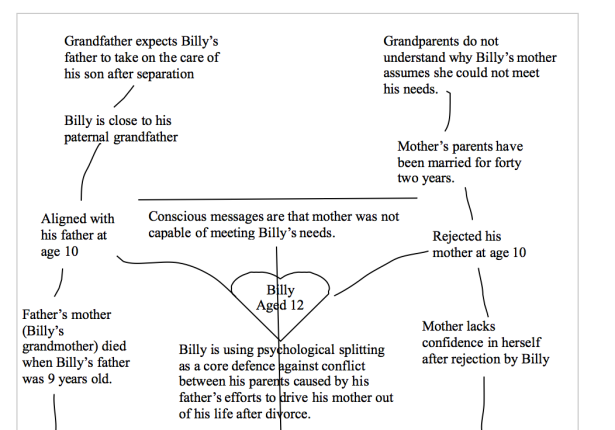 Our encounter with the child who is using rejection of a parent after separation tells us that the child is defending against something, this is what first alerts us to the reality that this is a case of parental alienation.  If our investigation then shows us that there is nothing which could be regarded as justified in the child’s rejection and the child is showing the signs of alienation which are only ever seen in situations where a child is being pressured by dynamics which have been configured somewhere in the family system, then we must dig deeper to understand what is happening to the child.

On the surface we can see that the mother is being rejected and the father is saying that this is because she could not meet Billy’s needs.  Father is further supported by his own father and together the two of them present as a fused dyad in which the narrative of lack of capacity in mother is strongly promoted.  Indeed mother looks like she is struggling to cope, she is under confident and anxious on presentation.  Billy echoes his father and grandfather and tells stories of how his mother did not feed him properly and how she neglected him.

The alienation aware practitioner hears this conscious story and begins to dig deeper into the history of the family.  Knowing that Billy is using rejection because of psychological splitting means that further investigation on both sides of the family is necessary.  Hearing father and grandfather’s history, the hypothesis that in father’s childhood world, his mother went missing through death, leads to consideration of attachment trauma in which Billy’s father is compelled to repeat the untold and unresolved story of his childhood through his son, by causing his son to lose his mother in the here and now.

Further investigation on mother’s side shows that her dwindling confidence is the result of her long battle with Billy’s father, the lack of support in family services around her and her own parents’ frustration with her inability to protect her relationship with her son.

In mapping the unconscious of this family we can see that the ‘secret’ is the impact on Billy’s father and grandfather of the sudden unexpected death of Billy’s grandmother when his father was 9 years old.  This death, which Billy’s father had never been able to grieve, lay dormant in his unconscious until the death/divorce of his relationship with Billy’s mother, which created immense shock and grief because it came as a surprise.  This shock triggered the unresolved grief from the death of his mother and the subsequent entry into the belief that Billy’s mother could not meet Billy’s needs, was actually the eruption of the unprocessed grief and loss of the past, fused with the unattended and neglected parts of the child within.  The person whose needs had not been met was Billy’s father and the person who had not met those needs because she died was Billy’s grandmother.

Mapping the unconscious is all very well but it leaves us with a question.  If it is not Billy whose needs are not being met and it is not Billy’s mother who is not meeting his needs and if parental alienation in this case is a trans-generational trauma re-enactment, what do we do about it given that Billy has been handed the responsibility for carrying this myth forward?

Given that Billy is adamant that he will not see his mother and given that CAFCASS consider that parental alienation is all about high conflict and so only really focus on the superficial presentation and given that social workers rarely understand how a child’s wishes and feelings can be manipulated by a parent, how do we, in the UK, reconfigure the dynamics which have caused this problem in the first place?

This is the work we are engaged in at the Family Separation Clinic, where we are building internationally recognised standards of intervention which liberate the child swiftly.

You can find out the answers to the questions above at the EAPAP 2018 Conference on August 30/31st where we will, alongside our esteemed colleagues,  be presenting  case studies of reunification work in severe alienation cases and where leading experts will be demonstrating the legal and mental health interlock which brings about resolution for alienated children and their families.  Working alongside parent representatives, this conference brings together a unique opportunity for developing new routes to resolution which meet the needs of different European legislative frameworks.  This conference  is being attended by leading Judiciary from around Europe as well as key legal people, policy makers and practitioners.  Here is where experience power meets research and practitioner expertise to create dynamic change.

Parental alienation is a cancer which affects families around the globe but it can and is being beaten, here in the UK, across Europe, in the USA and Australia as well as South America and many other countries.  All by using similar protocols, all drawing upon the extensive research evidence curated around the world by experts dedicated to changing the lives of children affected by divorce and separation.

Tickets for professionals are on sale here

11 thoughts on “Anatomy of Alienation: Mapping the Unconscious in Unjustified Rejection”