The reason it is different is that it is not symbolised language, it is behavioural language which is giving shape and meaning to something the child is exposed to in the inter-psychic relationship with the parent who is inducing the defence of psychological splitting.

Let’s unpack some examples to sharpen the meaning of this.

Language symbolises experience. It is an important developmental stage in a child’s life. Moving from the pre-linguistic stage to the capacity to apply words which have meaning to others outside of the self, enables the child to give meaning to feelings and experiences which had previously been without words or symbols.  When a child is able to say, I am happy when they are smiling and content, they give meaning to a feeling.

Children who have been made to be hyper attuned, are those who have not been assisted to separate from the early experience of sharing the mind as well as the physical self of a parent.  These children inhabit a world of ‘we’ in which their sensitivity to the feelings and psychological and emotional reactions of a carer is heightened and sharpened by repeated exposure to fear and anxiety inducing reactions in that carer.   When parents separate, if one parent becomes hyper anxious, hyper vigilent or hyper sensitive, or if that parent has been that way prior to the relationship ending, children may hyper attach to that parent.

This is a delicate area to work in because there are many reasons why someone becomes hyper vigilent, domestic violence being one of them.  This is why assessments for parental alienation must be carefully carried out and why differentiation is so important.  Where allegations of domestic violence are present in a case, it is important that these are tested in Court.  It is not for psychotherapists working in this area, to decide whether or not a parent has been violent. That is the role of the Judge.  When the judgment is made, then the work of rebuilding the relationship between children and the parent they have rejected can be done.

I should be clear, (because there is continued effort to mischaracterise parental alienation as a tool used by abusive fathers), that where someone has been found to be violent, this is not considered to be alienation.

The key phrase is found by the Court to be violent.. If violence has occurred, we would not consider the case for reunification work because the risks to the child have been clearly laid out by the judgment and it is not alienation.

Alienation is seen when there is no evidence of domestic abuse, nothing that the rejected parent has done of significant importance such as neglect or drug use during care of a child, and a pathological alignment with the influencing parent, is present in the child.

We can see the pathological alignment in the child via the presence of psychological splitting.  This defence, which is induced in a child, causes the division of feelings into wholly good and wholly bad. It is stark, strong and fixed in severe cases of alienation and when the relationship with the parent the child is aligned to is examined, the stark, strong and fixed blame projection of the other parent is obvious.

Turning inwards, to examine the inter-psychic world of the alienated child and parent, severe cases become more complex in that the child can begin to act out the unspoken narratives which are being conveyed by a parent who has an unresolved trauma which is hidden from their view and that of their child due to the defence of splitting.  This is written about elequently by Thamer Bako and Katalin Zana in their book Transgenerational Trauma and Therapy.

These unspoken narratives are sometimes symbolised by things that children say about a parent which sound strange and cannot be readily understood. For example, the child who told the police that he had been made to eat faeces before being abused by his father, which turned out to be his mother repeatedly telling him not to swallow his father’s shit.  No evidence of abuse was found, the child had had a relationship with his father prior to the child making allegations but there had been increasing evidence of his mother being angry with him about his relationship with his father which the boy could not make sense of. His growing dysregulation led to him seeking to make sense of what his mother was saying, picking up that he was not to love his father because his father was harmful to his wellbeing, the boy found the only way possible to give language to what he was being told to do.  ‘Don’t swallow your father’s shit, he is abusive and is abusing you’ was turned into ‘daddy made me eat poo and then he hurt me.’

It is urgent in my view that we explore the inter-psychic and intra-psychic world of children in divorce and separation because it is only really now that we are learning of the risks that arise there.  Clinically there is much to be excavated and articulated and this work is being undertaken by EAPAP so that the deeper layers of what occurs in cases of parental alienation are brought into the light for further understanding.

Detailing the evidence of conscious and unconscious non accidental injury to the mind of a child is an essential task. Giving voice to the unspeakable and keeping the spotlight where it needs to be, which is on the pathological alignment between the parent and child, is how we will stay focused in the midst of it all.

Alienated children’s long term health and wellbeing depend upon the reality they face being known.  Learning the language of the alienated child is how we will bring that reality to light.

Please note: when I use examples as above they are always a composite of work I have done, this prevents people from being able to identify or be identified. So, the child’s sex may be changed and the identifying theme will be different. The strangeness of what children say is unique to them which means that if a boy had actually said his father made him eat poo, that would be identifiable.  So the reality is that a child alleged a parent made him eat/drink something prior to abuse. That does not identify the child or case.  The reality was that something a parent said to the child caused the child to translate it into something else.  That does not identify the child or case. In my example I use the principles of what happened translated into an example of what that might look like.

It is always difficult to use real case studies in this kind of work because each case is so unique,  which means that I spend a lot of time translating the principles into well hidden case studies.

I do this because I think it is essential that the outside work understands the nuanced reality of what happens to children who suffer from induced psychological splitting. How they  make sense of what has happened and how they recover is a vital piece of missing evidence in my view. It is this which I am most focused upon at all times.

Tickets for the Online Conference of EAPAP are available now. Featuring leading clinicians in the field of trans-generational and attachment trauma, this conference will examine the inter and intra-psychic world of the alienated child as well as many other important areas of thinking in this field. 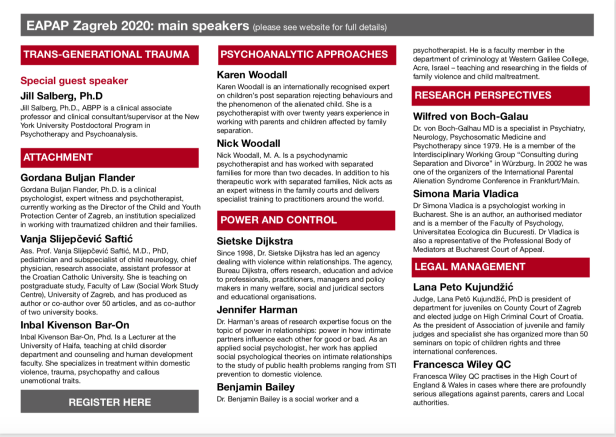 4 thoughts on “Giving Voice to the Uspeakable: The Language of the Alienated Child”